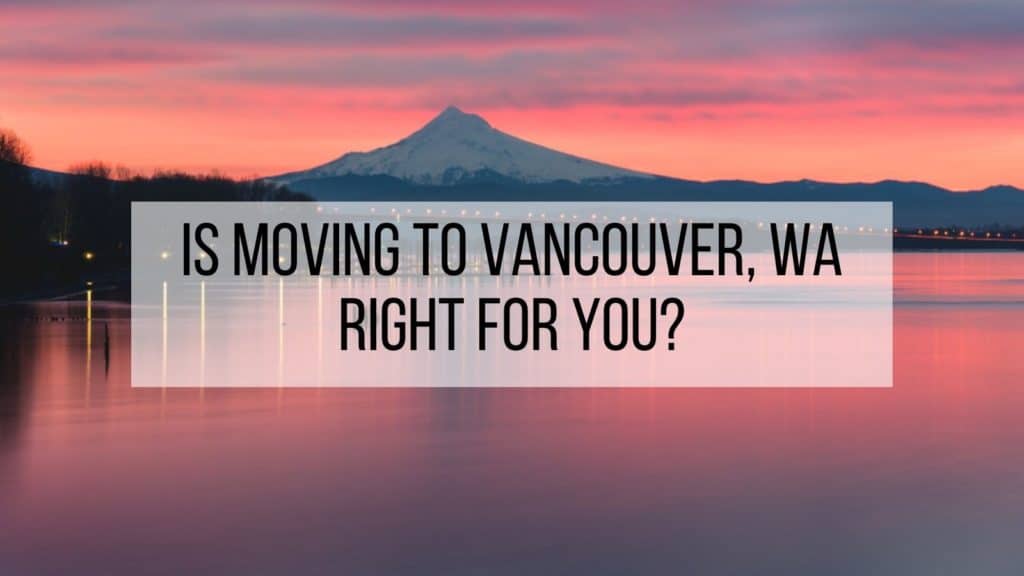 Is Living in Vancouver, WA Right for You? | 🏡 ULTIMATE Moving to Vancouver Guide

Sitting on the north bank of the Columbia River is Washington State’s fourth-largest city, Vancouver. As the county seat of Clark County, Vancouver is well known for its natural beauty, young culture, and close-knit, vibrant community. Though it’s a suburb of Portland, Vancouver has set itself apart with plenty of career opportunities across several industries, fantastic schools, and beautiful green spaces. Vancouver is constantly making national “Best Places to Live” lists and has won a long list of awards and recognitions, including:

Vancouver’s nicknames are The ‘Couve or Vantucky.’ However, the latter nickname has a somewhat negative connotation. Notable people from Vancouver include US president Ulysses S. Grant, ice skater Tonya Harding, and musician Willie Nelson.

Vancouver’s population is 169,982. It’s a somewhat diverse city. The racial demographic breakdown in Vancouver is 73% white, 12.2% Hispanic, 2.7% Black or African American, 5.2% Asian, and 7.1% Mixed or Other races. About 15.5% of Vancouver residents are foreign-born, the majority of whom were born in Mexico, the Philippines, and India. Though English is spoken by an overwhelming majority of people in Vancouver, you can expect to hear some Spanish spoken throughout the city. There are slightly more women in Vancouver with a male to female ratio of 49.6% to 50.4%.

Like nearby Portland, Vancouver has a reputation as a hipster town and destination. This is reflected in Vancouver’s young median age of 37, and a large number of locals fall into the 20-39 age bracket. However, a large portion of Vancouver’s residents are also older, married couples, many of whom have school-aged children, making this an extremely diverse city by age. With 55% of Vancouver residents listed as unmarried, it’s a great place to be single!

Considering Vancouver’s large size, it should come as no surprise that this city has dozens of unique neighborhoods to choose from. If you haven’t lived here before, the choices may seem overwhelming, but don’t worry! We’ve put together a list of the most popular Vancouver neighborhoods to get you started:

Located on the northern tip of Vancouver Lake, this desirable neighborhood in Vancouver is known as one of the best destinations for families in the city, with low crime rates, great schools, and large houses. You’ll love being surrounded by nature, with Whipple Creek Regional Park, and Vancouver Lake at the southeastern end of the neighborhood.

This small Vancouver community is situated along the banks of the Columbia River and is one of the most sought after places to live in Vancouver. The area has a suburban feel, but it’s just a ten minute drive to downtown. The neighborhood has plenty of shops and restaurants, and residents love relaxing in Fisher’s Creek Neighborhood Park.

Just northeast of Cascade Highlights is the Bennington neighborhood of Vancouver. There are plenty of restaurants, coffee shops on the eastern and western ends of the neighborhood, and a Walmart Supercenter for all your everyday needs. The walkability and easy access to amenities is probably why Bennington is popular with renters – about 55% of the neighborhood’s residents rent their homes.

Cost of Living in Vancouver 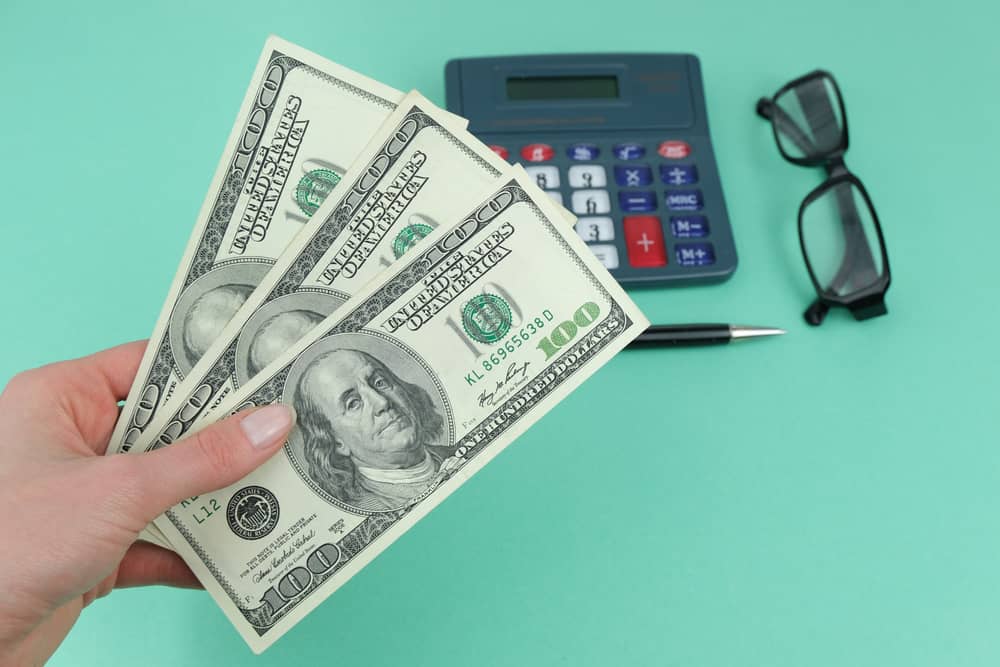 When you’re moving to a new city, it’s always advisable to look into the crime rates. When calculating crime rates, experts look at total crime, violent crime, and property crime. These crime stats come from the FBI. Here’s a look at Vancouver’s overall crime stats:

Burglary, theft, and vehicle theft all fall under property crime. The property crime rate in Vancouver is 54% higher than the national average.

The Weather in Vancouver

Vancouver and Portland share similar weather patterns. Vancouver has a warm-summer Mediterranean climate, but also experiences colder winds and temperatures than Portland. And if there’s one thing you can’t avoid in Vancouver, it’s rain, so make sure you have a solid umbrella, and rain boots. Vancouver experiences about 164 rainy days per year, especially throughout the fall, winter, and spring. Summers are warm and dry, with daily highs averaging in the high seventies. With average temperatures in Vancouver that rarely fall below freezing, you won’t have to worry about shoveling heaps of snow in the winter. Plus, when the sun finally comes out, you’ll get to enjoy some of the most gorgeous natural beauty in the US!

Things to do in Vancouver

Looking for fun ways to spend your days off in Vancouver? This city always has something fun to do! Check out these top attractions in Vancouver:

Vancouver is home to dozens of top eateries, but when you’re new to a city, the number of choices can be overwhelming. To help you get started on your culinary journey, here are a few of our favorite local hot spots in Vancouver.

Dinner with a view? At Beaches, you can enjoy beautiful food along the water. Menu favorites include the citrus calamari, the “Shameless Burger” and the fish & chips.

If you’re looking for upscale dining, head to Elements. This Vancouver favorite offers a creative menu, amazing wine list and an intimate experience that’s sure to impress.

Mother-and-son operated Dediko is one of the top rated restaurants in Vancouver. Specializing in traditional Georgian food, Vancouver residents rave about the dumplings and amazing breads.

Vancouver is well known for its affordability, especially in comparison to nearby, more expensive Portland. Median sale price for a home in Vancouver is $394,000, which is an 11.3% increase over last year. The real estate market in Vancouver is considered somewhat competitive, but homes usually stay on the market for less than two weeks and sell above asking price. Property taxes vary from one home to the next, but you can expect to pay between $2000-$3000 a year in Vancouver.

About 48% the population in Vancouver owns their homes, while the other 52% chooses to rent instead. Rent in Vancouver averages at $1,385 a month, and the average apartment size is 923 square feet. The most expensive places to rent in Vancouver are Esther Short, Hough, and Carter Park. If you’re looking for the most affordable neighborhoods in Vancouver, look at Bagley Downs, Columbia Way, or Dubois Park.

Looking for the best schools for your children? You’ll have about 200 options to choose from in Vancouver. The city is served by two school districts: Evergreen School District and Vancouver Public Schools. The top rated schools in Vancouver are Fishers Landing Elementary School, Alki Middle School, and Columbia River High School. Schools like the Vancouver School of Arts and Academics and Vancouver iTech Preparatory School offer specialized programs for ambitious students who want to pursue specific career types, while still getting a well-rounded education.

If you’re looking for great higher learning institutions, Vancouver offers three for you to choose from. Clark College is a two-year community college, and WSU has a campus in Vancouver. If you’re interested in pursuing religious studies, look no further than Gateway Seminary

Vancouver has tons of options for aspiring professionals! The median household income in Vancouver is $58,865. The largest industries in the city are healthcare, retail, and manufacturing; there are also plenty of jobs in educational and professional services here. With over 85,000 jobs in Vancouver, the local economy is growing, adding almost 2,000 jobs in the last year alone. The most common jobs are management, office/administrative support, and sales related occupations. According to Glassdoor, Intel, Nike, and Mentor Graphics are the highest rated places to work in Vancouver. If you’re looking for jobs in Vancouver, click here for current listings on Indeed.com.

Workers here also benefit from Vancouver’s close proximity to Portland, where the economy supports many more opportunities! Since the average commute time for people living in Vancouver is 23 minutes, we can assume that at least a few folks are taking advantage of Portland and Vancouver’s closeness.

Most people in Vancouver rely on personal cars to get around, and most households have 2 cars. Commuters can expect their commute to be about 23.5 minutes. Though over 75% of Vancouver residents drive alone to work, there are public transit options available. Vancouver’s mass transit system is called C-Tran, and it’s operated by the Clark County Public Transportation Benefit Area Authority. 134 buses, paratransit vehicles, and vanpools are available through C-Tran.

Vancouver is also served by three Amtrak lines, and the nearby Portland International Airport.

Pros and Cons to Living in Vancouver

Is moving to Vancouver right for you? Let PDX Movers, the best movers in the Vancouver area assist you with your relocation! Call us at 503-746-8795 today for a free quote!

Battle Ground is a town in Clark County in Washington state, about 11 miles northeast of Vancouver and 30 minutes from Portland, Oregon. The town

Are you ready to buy a house in Oregon? As a first time buyer, you already know it can be an uphill battle. The median