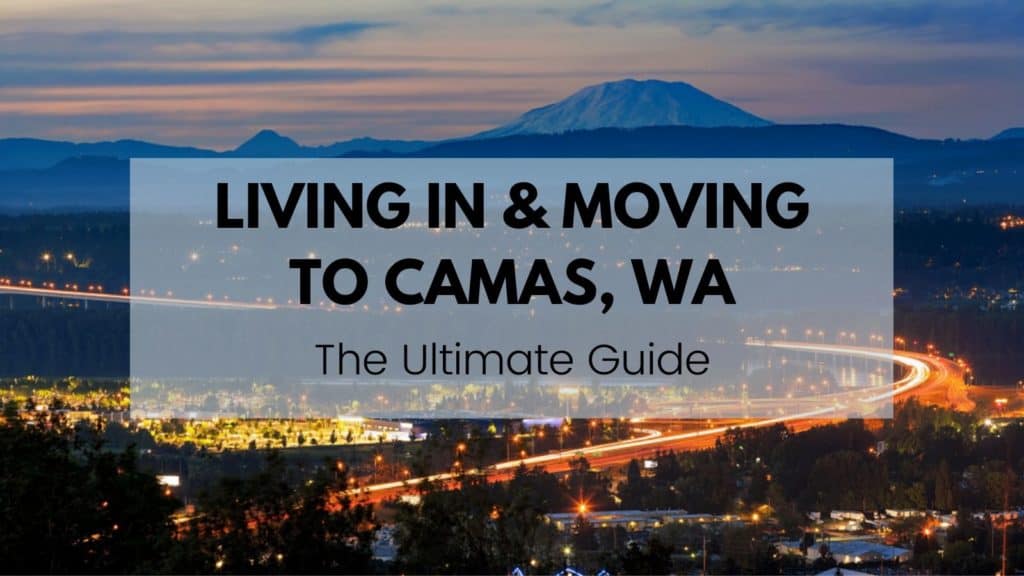 Just outside of Portland, OR and bordering Vancouver, WA is the city of Camas, WA. Camas is known for the beautiful tree-lined streets and the local community of small businesses that thrive in the downtown area. With its extremely low poverty rate, high median incomes, and family-friendly atmosphere, many people are moving to Camas! As a suburb of Portland, you get the ease of access to a big city without the busy traffic and urban atmosphere. If you’ve been asking whether or not migrating to Camas is for you, you’ll have your answer shortly.

The population of Camas is 22,086 people. The median age of those residing in Camas is 39, and you can expect many families living here. The poverty rate in Camas is especially low at 3.66%. Camas is safer than 79% of other cities in the United States, making it one of the top places to relocate to. With less than a third of the crime rate as the state of Washington, you can expect you and your family to be safe. The racial demographics of Camas are 82.3% White Alone, 7.48% Asian Alone, and 4.98% Hispanic or Latino.

Cost of Living in Camas

Groceries and health care are 15% more expensive in Camas than the national average, Transportation is 26% more expensive, but there is some good news about living in Camas. The utilities are actually very affordable in Camas. You can expect to pay 13% less than the rest of the United States!

Some of the best neighborhoods in Camas include Deer Creek, Parker Estates, Holly Hills, Sunningdale Gardens, and Downtown Camas. Deer Creek has a mixture of old and new homes, and it’s one of the most affluent neighborhoods in Camas. Parker Estates is a great Camas suburb for those who want older homes on larger lots. If you want an area in Camas that’s family-friendly and don’t have a budget in mind, Holly Hills is a gorgeous Camas neighborhood nestled in the hills. Sunningdale Gardens is close to Lacamas Lake, giving it an advantage for those who like to fish. And if you want the urban feel with a working class community, Downtown Camas is the place to be. No matter which neighborhood in Camas you decide on, now is a great time to purchase one of the many Camas, WA homes for sale!

The weather in Camas is fairly mild. The average temperatures in Camas are highs of 45°F to 83°F and lows of 36°F to 57°F. One of the complaints that some people dwelling in Camas have is that it rains too much. You can expect rain every month of the year, but it gets especially wet in the winter and spring. The rainiest months are November and March, which average 17 days of rain. You can expect at least 10 days of rain in every month but July, August, and September.

Things to do in Camas, WA

If you’re looking for Camas activities, you’re in luck! Below are the top-rated things to do in Camas.

With over 300 acres of green space, this park is a must-see for those looking for free attractions in Camas. It’s a lakefront park, but there are also dense woods to explore and walking trails to enjoy. Whether you want to fish, bird watch, or take a hike, you can do it here. There are trails of varying difficulty, so this can be a fun family-friendly Camas activity.

As the only movie theater in Camas, you’ll be spending a lot of time here if you’re a film buff! They offer both big-name movies as well as lesser-known indie films, and the best part? Their concession stand has adult beverages. So you can get your drink and movie on at the same time!

Ready for some delicious food in Camas? You don’t need to go to nearby Portland for a great bite. Check out these top-rated Camas restaurants.

There’s nothing better than a great burger, and Top Burger Drive In is the place to be if you want that classic American hamburger. With a diner-style outside and a drive through line that’s nearly always busy (but it goes fast!), you’ll quickly see why this is a local favorite with over 800 positive reviews.

If you’re looking for the best restaurant for couples in Camas, this is the place to go. This Camas eatery has modern Mexican dishes and inventive cocktails that will give you the perfect amount of buzz. With over 400 positive reviews, this is a place that you’ll definitely need to check out.

The average salary in Camas is $65,000, and the average hourly wage is $18.00. Popular jobs in Camas are hotel managers, bookkeepers, elementary school teachers, investment consultants, and senior marketing managers. Popular employers in Camas are Fisher Investments, Georgia-Pacific Corporation, Wafertech LLC, and Sigma Designs. Local Indeed jobs in Camas can be found here. Many people also work in nearby Portland. If this is what you plan to do, click on the links for directions if you need to travel from Camas WA to Portland OR which is 20.9 miles.

One of the benefits of living in Camas is the great school district. If you’re planning to relocate to Camas, your children will most likely go to one of these Camas schools: Dorothy Fox, Camas High School, Skyridge Middle School, Prune Hill Elementary School, Liberty Middle School, Grass Valley Elementary School, or Helen Baller Elementary School. Private schools in Camas include Camas Christian Academy, Pacific Crest Academy, and Camas Montessori School. All of these Camas schools have ratings of 8+ on Great Schools thanks to high test scores and low student to teacher ratio.

If you’re resettling in Camas, you’ll need help to get there. PDX Movers is the best Camas moving company, and we’ll take your stress away by making the whole process easy!