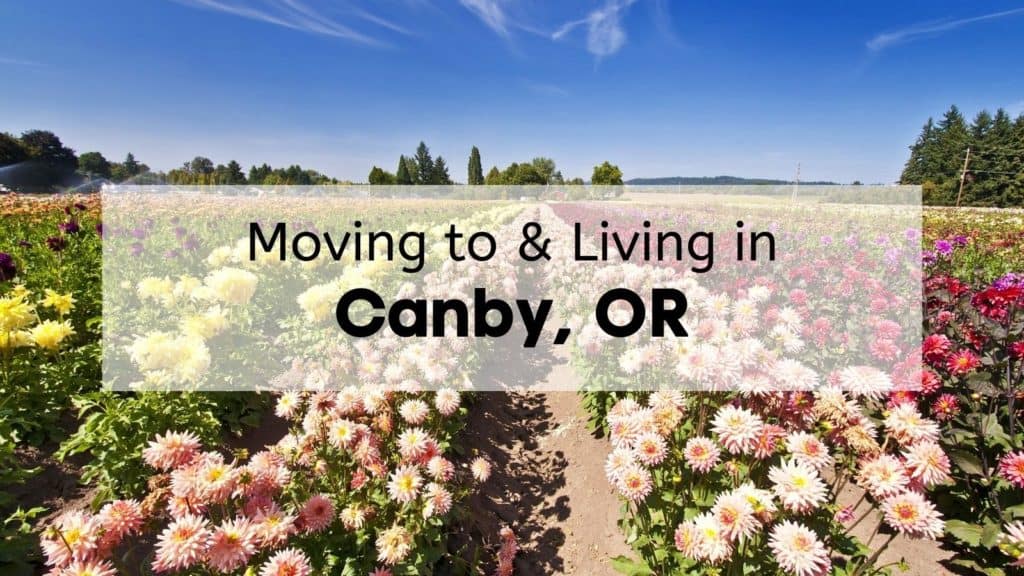 Known by its nickname of “Oregon’s garden spot”, Canby is a quaint and beautiful city located some ways south of Portland’s urban center. Named for a general slain in one of America’s many wars with Amerindians, the city was founded during the settlement of the West Coast, in 1857. Incorporated forty years later, Canby nowadays is a well-beloved semi-affluent residential city, known for the growing of flowers in particular. Canby is home to quite a few of Oregon’s most notable people, including state representative Kurt Schrader and MLB player Jay Baller.

Thinking about moving to this area, but wondering if Canby is a safe place to live? In terms of crime, Canby is an incredibly safe and secure community, with an excellent A rating on Areavibes. The total crime rate here is 48% lower than the national average, with violent crime being 54% lower, and property crime being 47% lower. Canby is served by the Canby Police Department, with 26 sworn officers.

Cost of Living in Canby, OR

While not as expensive as Portland, Canby is still a community with quite a high cost of living, with the cost of living here being 17% higher than most places in the United States, according to Payscale. The median home price in Canby is $329,700, which is marginally higher than the average Oregon home price of $312,200. If you choose to move to Canby, you’ll find that you’ll be paying more than the average for groceries and transportation, but less for utilities. In terms of renting in Canby, one can expect prices of $1,333 per month for all units.

If abstract cost of living percentages are unhelpful for you in getting an idea of how costly this city will be, take a look at everyday expenses you can expect to pay while living in Canby, provided by Numbeo.

Best Neighborhoods & Places to Live in Canby, OR

Canby is quite small, and therefore doesn’t really have the capacity for distinctive neighborhoods like bigger cities do. However, there’s still plenty to know about Canby’s real estate and living situations for the prospective resident. Check out some of your neighborhood options below:

In terms of price, you’ll find most of the most expensive homes in Canby’s expansive southern portion, with lots of big properties. The most affordable properties are concentrated in Canby’s urban center, where most of the population is.

If you want to make yourself a part of any of this community, you should check out the latest listings for homes for sale in Canby, OR.

If you are interested in renting, then take a look at some of the apartments in Canby.

Oregon is generally a pleasant state, weatherwise, but doesn’t quite have the great reputation of her southern neighbor, as you’ll definitely still be experiencing snow and rain here. You can expect lows of 36 degrees Fahrenheit during the winter months, and highs of 82 degrees Fahrenheit during the summer months. Canby experiences more than the average amount of rainfall when compared with the rest of the United States, with 43 inches per year as compared to 38 inches. Meanwhile, Canby experiences less than the average in snow, with only 2 inches as compared to 28. The best times to visit Canby, in terms of comfort rating, are July and August.

Things to Do in Canby, OR

Canby is much more of a relaxed city than her neighbor, Portland, but that doesn’t mean there aren’t plenty of opportunities for fun for the whole family! Check out shopping in the area like the Canby Shopping Center for all your shopping needs! You should also check out some of the best things to do in Canby, OR below:

A lovely outdoor park situated on a river, Canby locals come to this park for picnicking, social events, walking trails, and more. If you want to spend a nice, relaxing day outside, Canby Community Park is the perfect place for you.

Flower Farmer is the quaint and wholesome sort of attraction that perfectly suits the Canby community. A farm-like establishment with a collection of farm animals, a miniature train, several community events like the Pumpkin Run, and more, this is a lovely place to take your kids for the holidays or birthdays.

The community of Canby is served by the Canby parks system, which oversees all of Canby’s beautiful outdoor park areas. See all of this community’s most interesting parks at the Canby city parks & recreation site.

Places to Eat in Canby, OR

Alongside its host of things to do, Canby is also home to plenty of great eats! Check out some below:

Want to see the big game? In Canby, there are few better places to do that than Backstop. With over two dozen HD TVs for perfect game viewage, the guys (or the girls) will have a blast at this sports bar.

With everything from steaks to fondue, this saloon-styled establishment is a favorite amongst Canby locals for their excellent eats. If you want a truly fantastic American meal, look no further than Wild Hare!

Canby is served primarily by the Canby School District 86, which has over a third of its schools rated as “Above Average”. Some of Canby’s fantastic schools include Howard Eccles Elementary School, Baker Prairie Middle School, and Canby High School. Rest assured, your child will have access to some great education during your stay in Canby!

Students and others in Canby are served by the Canby Public Library.

Jobs in Canby, OR

Those planning on making a living in Canby should know that wages and cost of living have both been increasing, according to Payscale. The most popular positions of employment are Caregiver, Administrative Assistant, and Team Leader. The most popular employers in Canby are Fred Meyer Inc, Shimadzu Scientific Instruments, Inc., and Wilco. The average salary for a worker in Canby is $69k a year, while the average hourly wage is $18.14.

If you’re planning on living in Canby, careers in management or accounting may be your best bet! Check out the latest listings for jobs in Canby, OR here.

Map of Canby, OR

Explore Canby’s large variety of things to do, places to eat, and more with this map!

Canby’s zip code is 97013, while the area codes are 503 and 971. The commute from Canby to Portland is 25 miles long and will take you around 30 minutes. Canby’s time zone is Pacific Standard Time, and sits at an elevation of 153’.

Tips for Moving to Canby, OR

Ready to begin the process of moving to the community of Canby? Give PDX Movers a call at 503-746-8795! Our team is highly-trained and trustworthy, and these Canby movers will ensure your move is as easy as it gets! Call now or fill out our online form for a free quote!