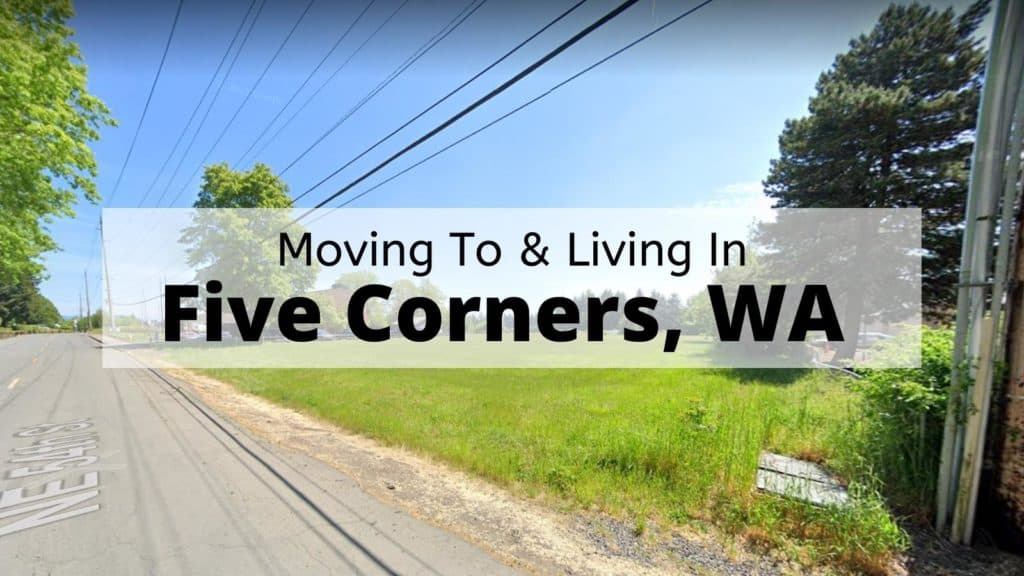 The marvelous census-designated place (CDP) of Five Corners is situated near the Columbia River and Oregon-Washington border of Northwest Oregon. Bordered by the city of Vancouver to the south, Five Corners of Clark County provides an excellent central location while still maintaining a laid-back, suburban feel that is known to attract families from all around. Named after its former five-sided intersection, Five Corners is a suburb of Vancouver that is filled with quiet and safe environments, dog-loving neighborhoods, and a wide range of cuisine options. You’ll also find plenty of cafes, groceries, bars, fitness centers, stores, and even a bridal shop to enjoy! While living in the friendly area of Five Corners, you’ll get also used to an array of outdoor trails and proximity to Washington’s lovely beaches and captivating mountains. Five Corners maintains a homey and welcoming atmosphere while being just 8 miles southwest of Downtown Vancouver.

According to the United States Census Bureau, Five Corners, WA has a population of 20,973 and a median age of 36.3 years young. With a 1.79% increase in the last year, the median household income in Five Corners is $71,802 – over $6,000 more than the national average. 55% of residents in Five Corners are married whereas their homes are likely to accommodate an average of 3 people per household. 90.5% of people in Five Corners are at least high school graduates, and 19.6% have attained a bachelor’s degree or higher. Regarding the economy, there has been a 0.9% job market increase in Five Corners which will be helpful for the 6.2% unemployed.

The racial demographics in Five Corners are slightly diverse with whites taking up 77.9% of the population, Hispanics making up 9.8%, and Asians and blacks being at 3.6% and 1.5%. The female population in Five Corners is at 50.4% which leaves the remaining 49.6% for the males.

Along with an average crime rate compared to the rest of the country, Five Corners is said to give residences a feel of safety and top-notch security whereas everyone watches out for one another. According to Crimegrade’s C+ score, the chances of being a victim in crime Five Corners is nothing out of the ordinary. In the case of an unlikely and unwanted event, you’ll have all 213 sworn officers of the Vancouver Police Department to send back up.

With the cost of living slightly below the state average, Five Corners has a decent level of affordability for those who live there. The sales tax rate in Five Corners is 8.4% and the income tax is 0%– this certainly beats the US average of 4.6%! As stated by Redfin, Five Corner’s median home price is $488,000. If signing a lease is on your agenda, Five Corners’ average apartment rent comes in at $1,574.

Below is a list of Numbeo’s everyday expenses in Vancouver, Washington- the larger city nearest to Five Corner’s. With this in mind, the prices below reflect similar, yet not the exact same prices as in Five Corners.

Regardless of where you choose to settle, all areas in Five Corners offer secure, lovely communities and excellent commute time to the freeway and other convenient places like Costco and the Vancouver Mall! For when you’re wanting to drive to the bigger city, the distance from Five Corners to Vancouver is 8.6 miles– about a 15-minute drive southwest.

While living in Five Corners, you can expect a year-round mild climate in which the warm, dry summers have highs of 79 degrees Fahrenheit, and the cold, wet winters have lows of 34 degrees Fahrenheit. The summers in Five Corners make for excellent weather to get out and visit the area’s well-maintained parks! There’s probably no need to buy snow boots with only 2 inches of annual snowfall in Five Corners. When you’re not utilizing your sunglasses during the 140 days of sunshine in Five Corners, there’s a chance that some of Five Corner’s 44 inches of yearly rainfall are paying a visit. With summer and early fall being the coziest seasons, the top months to visit Five Corners are in July, August, and September.

Things to Do in Five Corners, WA

The marvelous CDP of Five Corners offers residents a selection of parks, schools, shops, and restaurants. If you’re looking for a highly-rated shopping center, the Five Corners Mall will serve you well! Take a look below at more fun things to do in Five Corners, WA!

This small picturesque urban park is the perfect place to take the family and spend time surrounded by the essence of nature. With over 33 acres of land, the park provides picnic areas, nature-watching, and even barbeque grills!

For those interested in enhancing your hunting or self-defense skills, this not-for-profit club in Five Corners has five different shooting posts to practice from!

All parks and trails in Five Corners are maintained by the Clark County Parks system.

Located in the Five Corners Mall, this all-American food and retro-style restaurant in Five Corners serves a delicious breakfast and lunch that you can’t miss out on! Whether you settle for the home-style country omelet or the mouth-watering mushroom and swiss burger, this place is sure to keep you coming back!

This tasty bar and grill in Five Corners is known for its excellent burgers, steaks, and pork. You can also grab a delicious beer or great liquor while you’re enjoying the laid-back atmosphere and top-notch hospitality that this place has to offer!

Check out even more things to do in and around Five Corners with this map below!

For those interested in making a living, the future job growth in Five Corners is predicted to be higher than the US average. If you’re needing to work outside of the area’s borders, the mean commute time to work from Five Corners is 25.4 minutes. Five Corners mostly consists of white-collar jobs whereas many residents are employed in health, management, or educational industries. Likewise, some of the most popular employers in and around Five Corners include PeaceHealth and Vancouver Public Schools. According to Payscale, the average base salary in Five Corners is $67,000, and the average hourly rate sits at $19.45 an hour. If you’re looking for employment, take a look at some online open job listings in or near Five Corners, WA.

For those seeking to commute to an even bigger city than Vancouver, you’re in luck! The distance from Five Corners, WA to Portland, OR is 17.2 miles– approximately a 23-minute drive south.

All highly-recommended schools in Five Corners are served by the Evergreen Public Schools and Battle Ground School District. Some of to top-rated schools include Sunset Elementary School and Prairie High School. Whether you’re a senior resident in search of a good book, or a college student moving into the neighborhood, you’ll be just over a ten-minute drive from the nearly 5-star Vancouver Community Library.

Five Corners, WA of Clark County has a land area of 5.9 square miles and a population density of 3,076 people per square mile. The census-designated place of Five Corners maintains an elevation of 213 feet above sea level and a zip code of 98662. With the area code of 360, Five Corners is situated within the Pacific Time Zone.

Is living in Five Corners on your list of possibilities? To get started, give PDX Movers a call at 503-746-8795 today! Our trusted relocation crew and top-rated Five Corners moving services will make sure your transfer is convenient, quick, and stress-free!