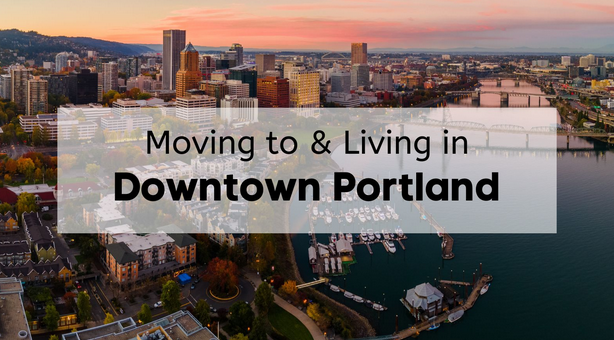 Hip, buzzing, and eclectic, Downtown Portland is one of the best places to live in the City of Portland. Situated in a prime location — along the Willamette River in between Interstate 405 and Interstate 5 — locals have access to it all. The neighborhood encompasses an impressive number of conveniences and amenities, including the Portland State University campus, popular retailers, attractions, world-class dining, and more.

Thinking about moving to Downtown Portland? Explore the latest figures, real estate, things to do, and more!

Where is Downtown Portland?

Downtown Portland is located in the center of Portland. Nestled along the Willamette River, and brimming with exciting attractions, restaurants, parks, and places to shop, locals enjoy an outstanding quality of life in this vibrant and trendy neighborhood.

The population of Downtown Portland is 6,375. This figure has remained steady over the years thanks to the neighborhood’s many excellent features. 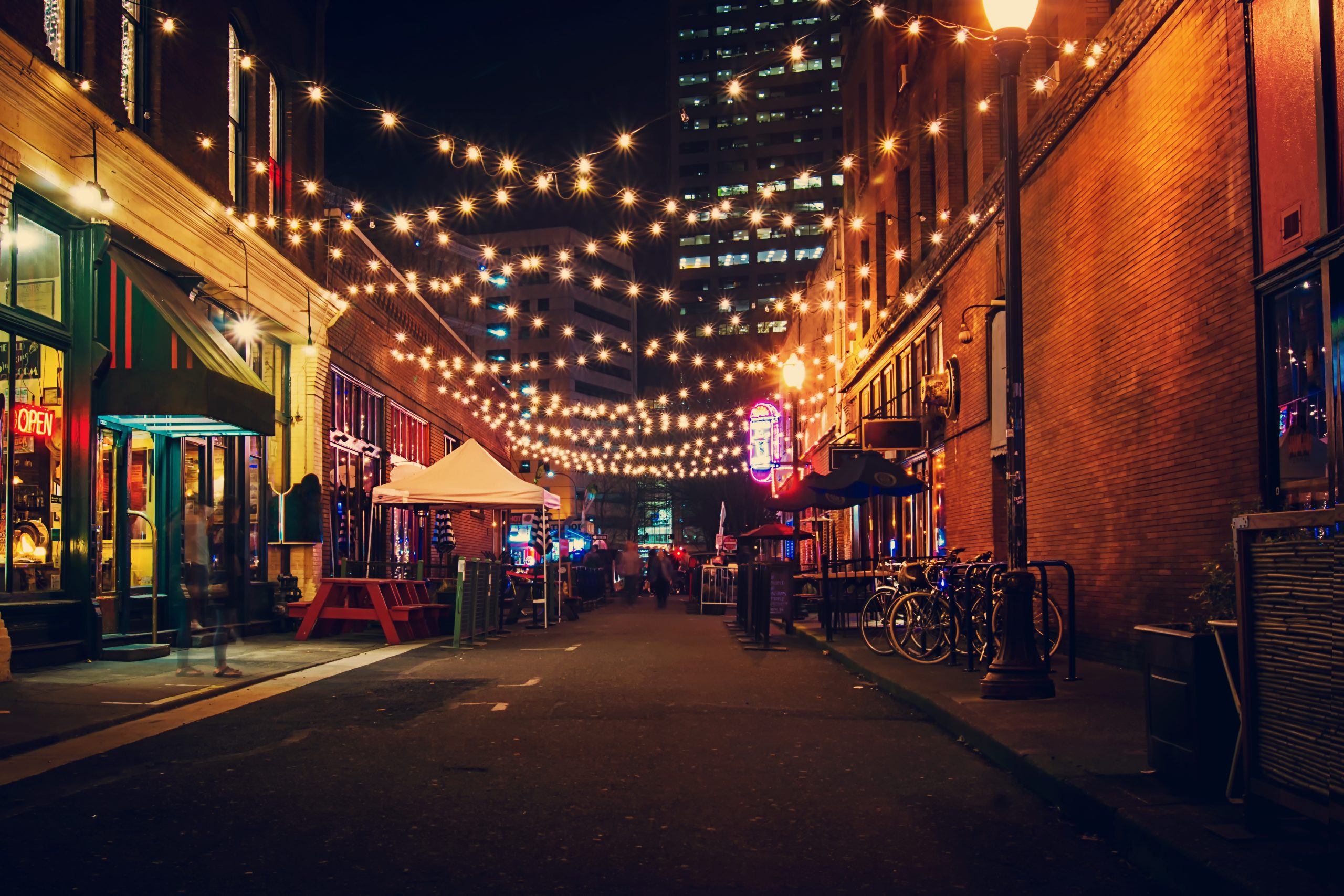 Individuals residing in Downtown Portland enjoy a marvelous set of conveniences and amenities. Within the immediate area, locals have access to an amazing dining scene, fast and affordable public transportation, and serene green spaces.

This neighborhood is acclaimed for its balance of big city amenities and tranquil spots to unwind. Rather than feel rushed or stressed by the hustle and bustle of a large urban environment, Downtown Portland is known as the city’s urban center with amazing retail, restaurants and things to do.  It’s hip, happening yet maintains an abundance of charm and calm. Streets are known for being exceptionally narrow, often no more than 64 feet wide. City blocks are also far smaller in comparison to other downtown areas, measuring in at an average of 200 feet. Another iconic element of Downtown Portland are its numerous bridges (a total of nine that enter the neighborhood). Popular bridges include the Fremont Bridge,the Marquam Bridge, the Burnside Bridge, the Ross Island Bridge, and the Hawthorne Bridge.

Contributing to the community’s unmatched setting is its lovely green spaces. Without question, one of the best places to spend the day outdoors in Downtown Portland is along the banks of the Willamette River. Here, locals and visitors alike can choose to relax and bask in the scenery at Mill Ends Park, Salmon Street Springs, or at South Hawthorne Waterfront Park. Inland, there are many more parks to explore, including Chapman Square and South Park Blocks.

Downtown Portland is a hotspot for sightseeing, shopping, and dining. For this reason, many of the city’s four and five-star hotels are located in the neighborhood. Within walking distance, one can access outstanding restaurants, boutiques, a movie theater, and several museums. Whenever you find yourself in this part of town, there’s always something fun to do and see in your leisure time.

Getting around town is made ultra easy thanks to the MAX (Metropolitan Area Express) Light Rail system. The MAX Light Rail is one of the top forms of public transportation in Downtown Portland. MAX connects Downtown Portland to places such as Gresham, Hillsboro, Milwaukie, and the Portland International Airport. There are numerous stops and stations throughout the area. Additionally, MAX Light Rail fares are reasonably priced at $2.50 (adults 18-64) for up to two and a half hours, or $5 for an all-day pass. Discounts are provided based on age and various criteria.

Things to Do in Downtown Portland — Best Restaurants, Attractions & Shopping

New to the best things to do in Downtown Portland? While the neighborhood only occupies one square mile, it is packed full of entertainment, top-rated eats, and unique sights you won’t encounter elsewhere.

Up and down the streets of Downtown Portland, you’ll find every type of food and beverage experience you desire. The high-end quality of each community establishment is on-par with the rest of Portland’s world-renowned dining scene.

Want to kick off your morning with an exceptional cup of coffee? Look no further than Coava Coffee Roasters. Impressing the most discerning of coffee enthusiasts, this cafe sources and roasts its own beans to perfection. Aside from Coava, there are plenty of other high-quality spots to grab an amazing batch brew coffee, pour over, or iced americano, including Never Coffee, Case Study Coffee Roasters, and the now nationally-acclaimed Stumptown Coffee Roasters.

Searching for Downtown Portland’s tastiest appetizers, entrees, desserts, and beyond? To the delight of residents, there is a wide array of fantastic eateries minutes from home. Upon moving to Downtown Portland, be sure to try the delectable menu offerings at Southpark Seafood, Shigezo, Portland City Grill (which features stunning city views from the 30th floor of the U.S. Bancorp building), and Departure Restaurant + Lounge.

In the mood for a day of retail therapy? Throughout Downtown Portland, there are dozens of popular retailers to browse. Just outside of the border of Downtown Portland, you’ll find famed bookstore Powell’s City of Books. As one of the city’s most iconic stores, stopping in to check out the expansive selection of new and used books is a must-do.

Toward the center of the neighborhood, get all of your shopping done at Pioneer Place mall. This indoor mall houses upscale retailers such as Apple, J. Crew, H&M, Louis Vuitton, Saint Laurent, and Zara.

Things to do & attractions

On top of the beautiful parks found throughout the area, Downtown Portland features many noteworthy attractions.

Among the top things to do in Downtown Portland, a definite must-see is the Portland Art Museum. Recently celebrating their 130 year anniversary, the museum’s traveling and permanent exhibits span even imaginable medium, influence, and style. Looking to attend a moving performance or exciting engagement? From classical concerts to film screenings and Q&As, the Arlene Schnitzer Concert Hall is another top Downtown Portland attraction.

Downtown Portland is part of the Portland Public School District. Inside of downtown, there is a selection of schools that span most grade levels. Additionally, Downtown Portland is home to Portland State University, which offers a number of excellent undergraduate and graduate programs.

Planning to rent? The average monthly rent cost in Downtown Portland is $1,761 for a 756 square foot apartment.

Getting ready for your upcoming move to Downtown Portland? Our Downtown Portland movers at PDX Movers are here to deliver an easy, stress-free experience. Serving over 3,000 customers every year, we know what it takes to achieve efficient and seamless relocations. Contact us now to request your custom moving service quote. 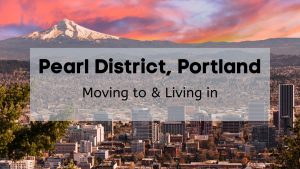