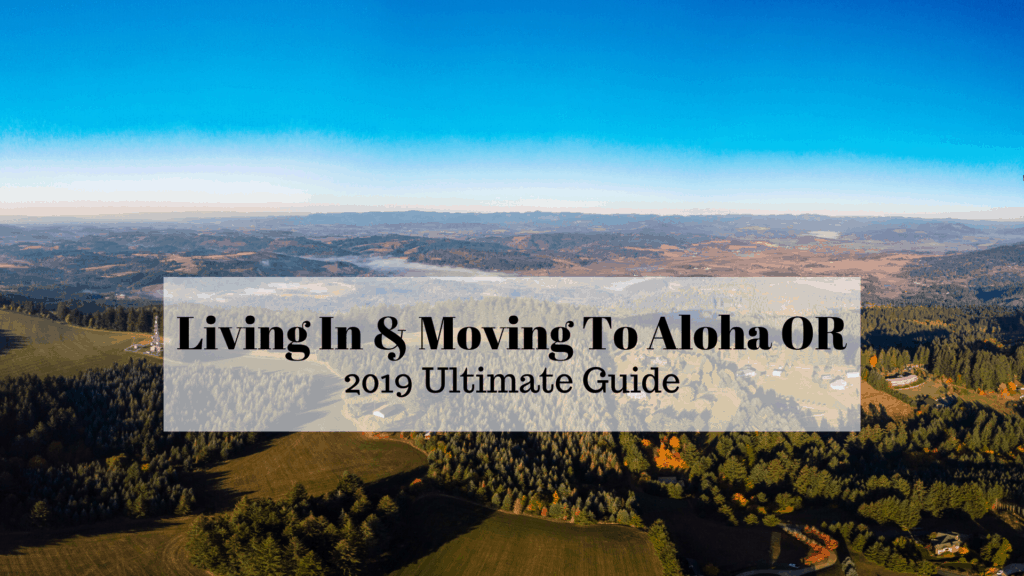 Aloha, Oregon is a smaller unincorporated, census-designated place in Washington County, Oregon just 10 miles west of Portland. Don’t be fooled by its status: Aloha is a rapidly growing community with plenty to offer.

Are you relocating to Aloha for work, affordability, and a slower lifestyle? You aren’t alone. This popular commuter destination offers affordable housing with plenty of job opportunities nearby and a beautiful setting you’ll fall in love with. Located between Hillsboro and Beaverton, Aloha still offers the amenities of the city with room to spread out and enjoy nature.

Aloha is located in the heart of Tualatin Valley, Oregon, a lush area with smaller, local communities and a slower lifestyle. There are many reasons to move to Aloha, OR, from its 32 wineries, rich international cuisine, and seasonal produce to endless outdoor adventure for hikers, runners, and paddlers.

Aloha has a surprisingly large population for an unincorporated community. The population of Aloha, OR is 55,200 with a large workforce of more than 27,700. Residents tend to be a bit older than average in the U.S. with a median age of 34. The median household income in Aloha is $71,046, well above the national median income of $59,000 and the Oregon median income which is just a bit higher.

In 2014, Aloha was ranked number 10 on NerdWallet’s Cities on the Rise in Oregon report, just behind Portland, thanks to its growing workforce and rising employment rate. Between 2000 and 2010 alone, its population grew by more than 18% as a surge of people began moving to Aloha, OR from inside and outside the state.

Cost of Living in Aloha, OR

When you’re considering moving to Aloha, OR, you’re probably wondering, what is the cost of living in Aloha? Will it fit with your budget and lifestyle? Oregon, in general, has a somewhat high cost of living compared to other areas of the United States and this is true of Aloha as well.

Living in Aloha means having your choice of several neighborhoods, each with something unique to set them apart. Aloha can be divided into about nine neighborhoods which range dramatically in price. If you’re looking for the most affordable neighborhood in Aloha, OR, you’ll probably want East Hillsboro.

The most affluent area of Aloha is Aloha South where the median list price is more than $500,000. If you love to be surrounded by nature, Aloha South is the place to be with the beautiful Cooper Mountain Nature Park, Northridge Woods Natural Area, and the Lowami Hart Woods Natural Area with mostly residential development.

The largest neighborhood is the city center of Aloha where you’ll find the Reserve Vineyard & Golf Club, the Meriwether National Golf Club, and Rood Bridge Park. This area is a good choice if you want to be near all of the best amenities of Aloha or enjoy golfing. The Reserve Vineyard & Golf Course is located on lush farmland at the edge of wine country and it’s hosted some of the most prestigious golf events like the PGA Champions Tour Major and the Fred Meyer Challenge. It also has a 4-1/2-star rating by Golf Digest.

Aloha, OR Weather: What to Expect

Living in Aloha may be a bit of an adjustment if you’re coming from somewhere sunny. The area only gets about 142 sunny days per year while the national average is 205. Summers are typically warm and dry but short while the winters can get very cold and bring rain or snow.

Interestingly, it can rain for about 11 months out of the year: between mid-July and mid-August is the only rainless period. If you hate shoveling snow, one of the benefits of living in Aloha is it only gets about 3 inches of snow per year — far below the national average.

The good news is you won’t deal with much in the way of extreme weather. Aloha rarely gets below 25°F in the winter and summers rarely get hotter than 95°F. For most of the year, you can expect overcast days with overcast, partly cloudy, or cloudy days for around 8 months of the year.

Jobs in Aloha, OR

Ready to explore Aloha, OR jobs? Many residents work in industries such as manufacturing, health care, retail, and education, but the community has a large number of people working in professional, technical, and scientific fields such as engineering.

Some of the best places to work in Aloha are in Portland, which isn’t a surprise as Aloha is a major commuter community for people who work in the city. The “Silicon Forest” of Portland has a large number of tech companies which are among its top employers, but athletic wear and the metal industry are also big.

Top employers in Aloha, Portland, and other communities within a 15-mile commute include:

Best Things to Do in Aloha, OR

Before you relocate, it helps to have an idea of things to do in Aloha, OR and the best places to eat. After all, these things help paint a picture of what it’s like to live in Aloha and how you will probably spend your time. Here are some great things to do in the city.

Be sure to visit Aloha’s best Chinese restaurant where chefs from many regions of China use non-processed ingredients to prepare original dishes like dim sum.

In the mood for Italian? Nonna Emilia is a local fixture that has been serving housemade pasta, pizza, and other Italian classics since the 1970s. There’s even live music to complete the ambiance!

Living in Aloha, OR Tips

Are you ready to start enjoying life in Aloha and get your relocation underway? Call PDX Movers at 503-746-8795 to get started with a free moving estimate from our friendly Aloha movers.