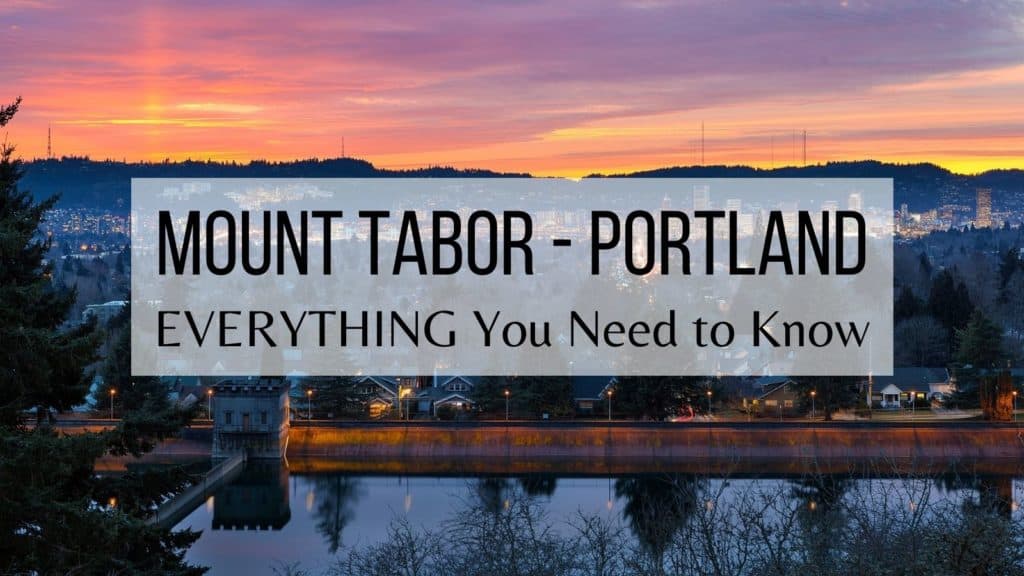 The community of Mount Tabor is a large neighborhood located in southeast Portland. With nice weather and plenty of fun local amenities, Mount Tabor is a popular part of town home to a wide variety of people in all walks of life.

Is Mount Tabor a good place to live? Many residents living in Mount Tabor consider it one of the top Portland communities due to its convenient location, nice places to eat, and suburban lifestyle.

Known for being home to one of the largest and most popular parks in Portland, Mount Tabor presents many great reasons to call this place home and provides more than enough fun things to do.

Moving to Mount Tabor also means you get the amazing opportunity to live right next to an extinct volcano.

The area now known as Mount Tabor was originally established as a small farming community back in the 1850s. About 50 years later, local leaders decided to build a large park to conserve the beauty of the scenic neighborhood.

A man named Plympton Kelly named the community after Mount Tabor located in Lower Galilee, Israel. The 196-acre park was completed in 1903 and was designated with the same name. Two years after the park’s completion, the neighborhood was officially recognized as a Portland community. 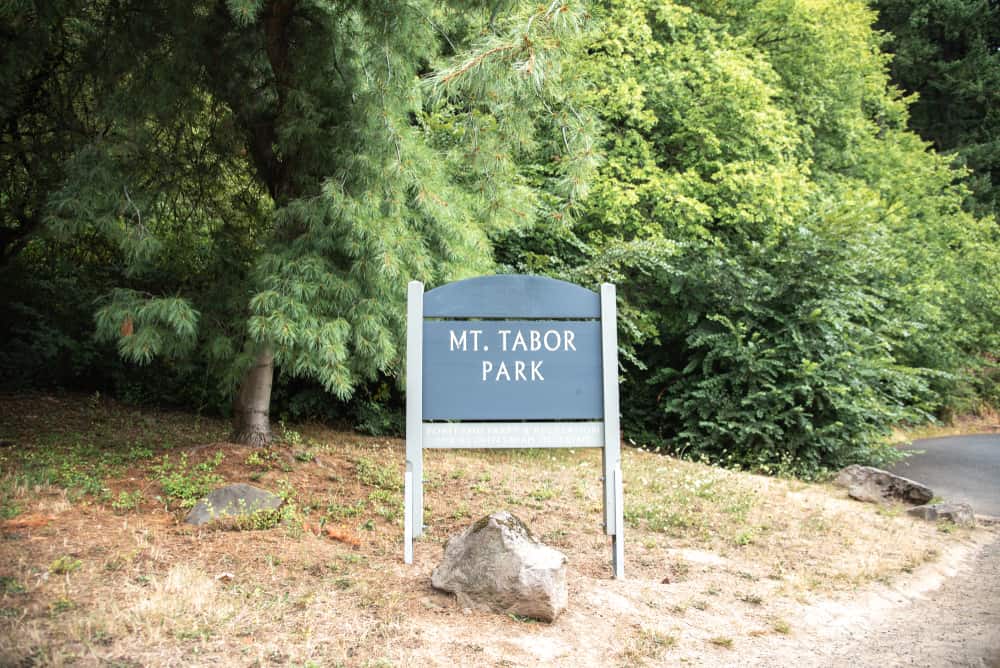 For a brief time, Mount Tabor Park was the largest park in Portland until the construction of Forest Park in 1948.

In 1913, a team of road builders were working on an area along the side of the mountain and found traces of volcanic cinders. This allowed researchers to discover that the community had been built along the side of a once active volcano. At 636 feet in elevation, Mount Tabor in Portland is one of only six cities across the United States with an extinct volcano within its city boundaries.

As of 2004, Mount Tabor Park was added to the National Register of Historic Places.

Spanning a fairly small area of only about 1.6 square miles, Mount Tabor can be found about 9 miles east of downtown Portland. Mount Tabor is bordered by Montavilla, North Tabor, Richmond, South Tabor, and Sunnyside.

The boundaries of Mount Tabor go from 49th Avenue on the west side to 76th Avenue along the east. Then, from Division Street on the south end up to Burnside Street on the north.

As a Portland neighborhood, Mount Tabor is located within Multnomah County and covers two zip codes including 97206 and 97215. A new local phone number in Mount Tabor will start with an area code of 503 or 971.

When it comes to Mount Tabor public transportation, the community benefits from the same resources as other Portland residents. Portland’s TriMet buses stop around each side of Mount Tabor Park as well as other various parts of the neighborhood. Anyone living in Mount Tabor is also no more than one mile from the near MAX Light Rail station, which conveniently travels to multiple destinations around Portland such as downtown, up north, and east to Gresham.

The Mount Tabor population is 10,217 residents with a median age of 40 years old. About 44% of households in Mount Tabor are married with children, making it a good place to raise a family.

Mount Tabor demographics are made up of 84% Caucasian, 6% Hispanic or Latino, 6% Asian, and 1% Black or African American. The majority of locals living in Mount Tabor are considered to be well educated with about 65% of residents having a college degree. 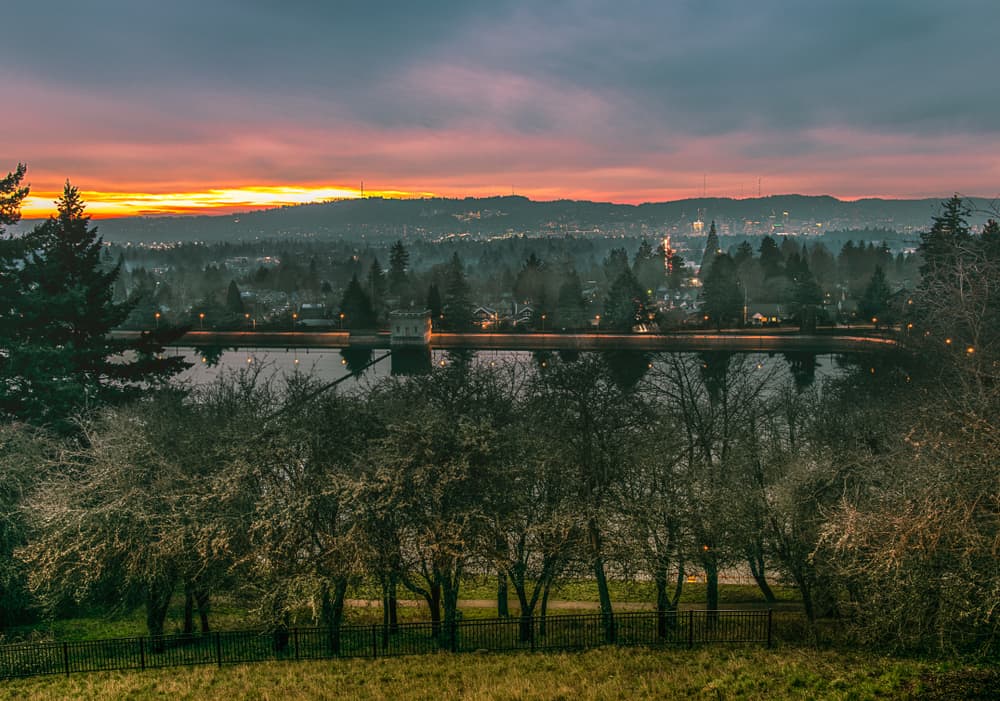 The median household income in Mount Tabor is $76,800, with a workforce made up of mostly healthcare workers, educators, and business professionals. Mount Tabor has a 3.8% unemployment rate, which is currently lower than the national average.

Is Mount Tabor a safe place to live? The crime rate in Mount Tabor is about 61% higher than the national average. But it is also 70% lower than the Portland average, making it one of the safest communities around town. Mount Tabor is safer than more than 56% of cities across the state of Oregon.

Places to Eat, Things to Do, & Shopping in Mount Tabor

Although the community spans less than two square miles, there are plenty of convenient amenities and nice restaurants to enjoy in Mount Tabor.

Among the top places to eat in Mount Tabor is Coquine, where visitors can enjoy a cozy atmosphere as they dine on New American fare. Some of the best items on their menu include the Dungeness crab, Vesuvio pasta, beef short ribs, their specialty Coquine burger, and more. Make sure you visit this top-rated Mount Tabor restaurant and don’t forget to grab a dessert like their chocolate mousse or Coquine cookies.

Sometimes you really need a great slice of Italian pie and Pizzicato Pizza is the best restaurant in Mount Tabor for you to find one. With a laid-back setting, this pizzeria offers you the chance to customize your own pizza or to choose from one of their specialty creations. Head over to this mouthwatering place to eat in Mount Tabor for a slice, a panini, a salad, or other great dishes.

Easily the most popular thing to do in Mount Tabor is to visit the large and welcoming area of Mount Tabor Park. This large space provides access to tennis courts, basketball courts, a playground, picnic tables, a community garden, and so much more. Hike up the Mount Tabor Stairs to experience the 360-degree panoramic views and to get a glimpse of the nearby City of Portland Reservoirs.

Another one of the best activities in Mount Tabor can be found at the odd and interesting destination known as The Zymoglyphic Museum. This one of a kind experience has exhibits of strange historical and anthropological pieces that you’ll find both bizarre and intriguing. It features objects that have gone through a natural process of fermentation.

There aren’t many shopping destinations within Mount Tabor’s borders but one location its residents have access to is the local East Burnside Plaza. This shopping center is home to a QFC grocery store, a pet store, a nail salon, a bike shop, and more.

The cost of living in Mount Tabor is about 37% higher than the national average and about 19% higher than the Oregon average. The housing market is one of the biggest factors in the higher living costs when compared to other parts of the state.

The average price of a home in Mount Tabor is $665,000 with a median sale price of $270 per square foot. Local homes for sale in Mount Tabor, OR offer plenty of beautiful options and tend to require an average down payment of 16.7% for the purchase.

Mount Tabor is home to about 1,565 kids under the age of 18 years old, making up around 15% of the local population. Most of these children attend schools within the Portland Public School District, which has good programs that parents are happy about. The top schools in Mount Tabor are:

High school graduates and other adults looking to work on their secondary education have a couple of options for colleges in Mount Tabor. Warner Pacific University can be found on the south side of Mount Tabor Park. The area also hosts the Western Seminary Portland Campus as well.

Moving to Mount Tabor, Portland, OR?

With so many great reasons for moving to Mount Tabor in Portland, OR it’s no wonder that people keep relocating to this fun community. If you need assistance with an upcoming transition to or from this area, PDX Movers is the best moving company in Mount Tabor! Get in touch with us today by calling tel:+1 or complete the Request a Quote form on this page for a free moving estimate!