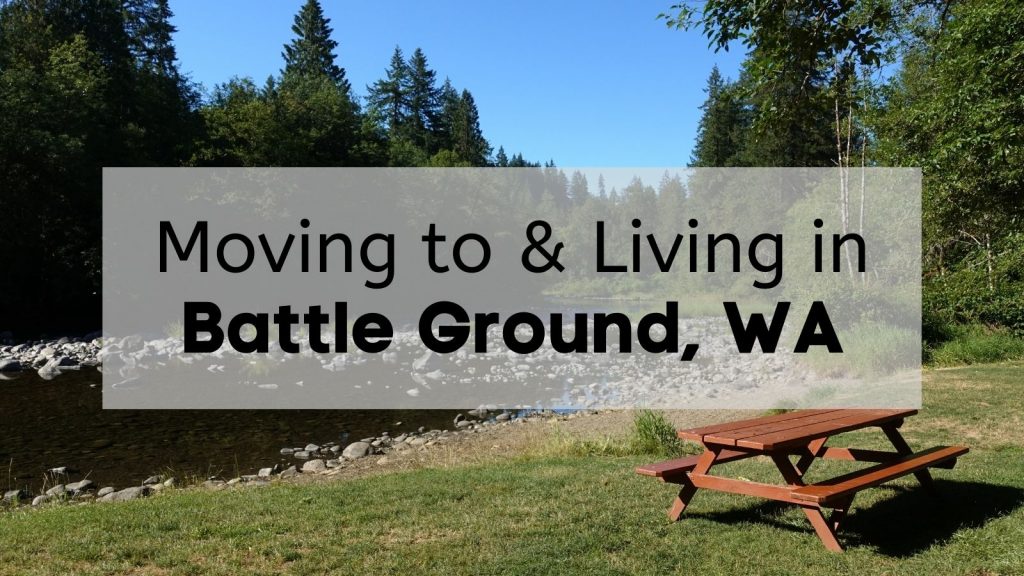 Battle Ground is a town in Clark County in Washington state, about 11 miles northeast of Vancouver and 30 minutes from Portland, Oregon. The town got its name from a battle that never happened – an 1855 standoff between the military and the Klickitat peoples involving Chief Umtuch and Captain Strong’s soldiers. Today, two schools in the area are named after the captain and chief. The charming area was incorporated as a town in 1951

The town is located between the Cascade Mountains and the Pacific Coast, offering natural opportunities for recreation activities like parks, streams, forested areas, and lakes. Several notable people have lived in Battle Ground over the years, including Bethany Joy Galeotti, an actress best known for her role in One Tree Hill, Gerry Staley, a professional baseball player, and Tonya Harding, the Olympic figure skater.

According to the Economic Policy Institute, a family of 4 needs to earn $96,093 to live in Battle Ground, WA, which is about 26% higher than the rest of the country. The average home price in the city is $518,000.

The most desired neighborhoods are located in the northwest parts of the city while more affordable living can be found in the southern regions. Regardless of the neighborhood you choose, you can easily drive the 18 miles from Battle Ground to Vancouver in about 22 minutes, or make the 26 mile trek from Battle Ground to Portland, Oregon in about 32 minutes. You’ll find the entire city has a neighborly feel, with over 70% of the population owning their homes. Some of the best neighborhoods to live in the town include:

Meadow Glade – bordered by Brush Prairie to the southeast and Dollars Corner to the northwest. It’s considered one of the best places to retire in Washington. Many people live here and make the 23 mile, 28 minute daily commute from Meadow Glade to Portland, Oregon for work.

Venersborg – Originally named ‘Venner’s Villas’ in the late 19th and early 20th centuries, the community was originally marketed as an area resembling rural Sweden in flyers written in Swedish, so most of the early settlers were of Swedish ancestry. Bordered on the south by the Salmon Creek, and bordered by Lewisville to the northwest, the neighborhood is still rural with only three non-residential buildings in town. Many people live here and make the 22 mile, 29 minute daily commute from Venersborg to Vancouver, WA for work.

Lewisville – an ideal neighborhood for families in Washington, Lewisville has top rated public schools, low crime rates, and is primarily made up of owner-occupied, medium sized single-family homes with three or four bedrooms. Over 13% of residents work from home which is a higher percentage than 95% of American neighborhoods.

If you’re living in Battle Ground, you’ll notice the area gets more rain than the rest of the country. The US averages 38 inches of rain annually but this area of Washington is a little gloomy and gets about 54 inches per year. You’ll probably want to keep an umbrella in your car for those unexpected bursts of rain just as you’re trying to run errands.

You won’t have as much use for sunglasses as you might in other parts of the country, as the town only averages about 140 sunny days per year compared to the US average of 205, but you’ll find August – September among the most pleasant months in the area with comfortable temperatures around 78 degrees.

There isn’t much snow here, only about 2 inches per year, but if you enjoy snowboarding and skiing, don’t despair! Living here means you’re located within an hour and a half of the mountains where you’ll find ample snow for winter activities.

Things to Do in Battle Ground, WA

In addition to the numerous parks and recreation activities provided by the Battle Ground Parks and Recreation department, the area and surrounding communities offer a variety of opportunities for entertainment.

This park is one of the best places to spend the day or a weekend with the kids and should be on your list of can’t-miss things to do. It’s a volcanic lake with equestrian and hiking trails, boating, and campsites. Located in the Cascade Mountain foothills, the 280-acre park features a trout-stocked lake for fishing, day-use restrooms, and picnic areas.

Bailey’s Tiger Bowl offers something fun for the whole family to do in Battle Ground, whether you join organized leagues or stop in for open bowling and a quick bite to eat from the extensive menu of burgers, sandwiches, salads, and appetizers.

A private park in nearby Brush Prairie, Alderbrook Park offers mini-golf, paddle boats, Friday night cruise-ins, movies in the park, a huge beach-entry swimming pool, and an annual Oktoberfest event. There is a concession stand but no outside food or coolers are allowed in the park. Alderbrook Park is a great way to escape the city with your family or for a unique date. The venue can be rented for weddings and private parties.

Take a ride about 25 minutes outside of town for a fun and free activity: disc golf! Open rain or shine, the Glenwood Disc Golf Course is a standard 9-hole, par 3 located on the grounds of the Glenwood Community Church. Bring your own discs.

Other Major Attractions in Battle Ground

Battle Ground, WA provides for some very convenient shopping including:

For the best authentic Mexican Food, visit Los Pepe’s for eat-in or take-out. Started by two brothers, enjoy their favorites like quesadillas, enchiladas, chicken & mole, or choose from the meatless menu.

Named after the famous Greek phrase by King Leonidas when the Persian armies required the Greeks to surrender their weapons, Molon Lave means “come and take them”. George’s Molon Lave is authentic Greek food made from scratch based on the owner’s great-grandmother’s recipes. Stop in for happy hour Tuesday through Saturday or anytime for fresh food from the oven and grill.

The best place for a quick breakfast or lunch, stop in for a hearty breakfast or burgers for lunch. Sit at the diner-style, counter-top seating, or at any of the tables for an enjoyable meal.

The best place near Battle Ground for a night out with friends or a date, Prairie Tavern offers burgers, pizza, and sandwiches with live music, tv sports, and pool tables.

The largest industries are health care, construction, and manufacturing but the highest paying jobs are found in utilities, agriculture, forestry, fishing, and hunting.

If you’re looking for jobs in the area, try looking at the city’s top employers:

Here’s an up-to-date listing of jobs in Battle Ground. And don’t forget, you’re within commuting distance to both Vancouver, WA and Portland, OR for more employment opportunities.

Families living in town are served by the Battle Ground Public School District for Kindergarten through 12th grade. There are 7 primary schools, 6 middle schools, 2 high schools, and 4 alternative schools.

If you’re flying in or out of the city, the closest airport is Portland International Airport (PDX).

Explore more places to eat, fun things to do, and more with this Battle Ground, WA map:

After you’ve chosen the best area to live in town, reach out to our reputable Battle Ground movers for a stress-free relocation. We know the area well and can ensure you a quick and effortless moving experience.