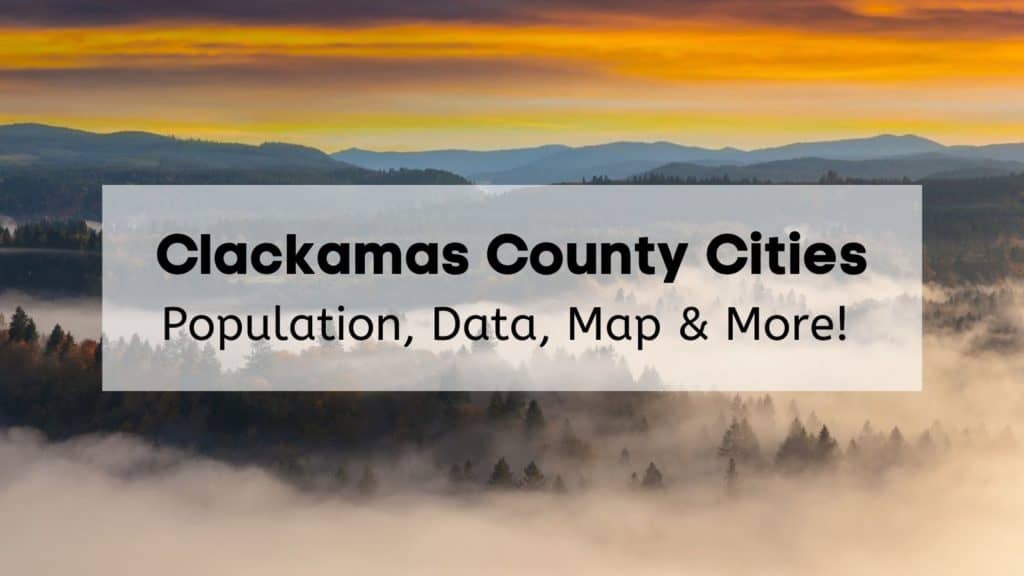 If you’re ready to move to a new area like Clackamas County, you’re taking a big step and have lots to think about. A top priority is choosing the best community for your lifestyle. However, with 14 cities and towns in Clackamas, choosing the best one isn’t such an easy thing to do! We’ve compiled a list of Clackamas County’s top cities, towns, and villages, and put together in one place all the information you need to know to help you narrow your choice down. Although every county has other types of communities, like census-designated places, also known as CDPs, we haven’t included any in our guide since they are not incorporated, independent municipalities. CDPs differ from entities, like cities or towns, in that they are not independently governed. They are geographic entities designated for census-gathering purposes. Let’s dive in!

Clackamas is Oregon’s third-most populous county, and it was named after the Clackamas Indians, who lived in the area. Clackamas County encompasses part of the Portland-Vancouver-Hillsboro, OR-WA Metropolitan Area. Located in northwest Oregon, Clackamas County sits in the Willamette Valley. Originally named the Clackamas District in 1843 as one of 4 Oregon districts, it was redesignated as a county in 1845. The county seat is Oregon City.

Clackamas County’s diverse geography spurs its outdoor lifestyle. Residents of Clackamas County’s cities enjoy activities such as kayaking, biking, visiting scenic valley wineries, and taking epic mountain hikes. You can also explore part of the original Oregon Trail. Clackamas cities are also home to arts festivals, historical sites, museums, cultural centers, public art, and murals. There are 14 incorporated entities (cities, towns, villages or hamlets) in Clackamas County, and Portland is its largest. The county is not very diverse, with a demographic breakdown of 81.1% White, 5.27% Hispanic, 4.735% Asian, 3.28% mixed or other races, and other Hispanic 2.78%. About 15.5% of Clackamas County’s population is foreign-born. Employment has declined by 1.75% in the last year. The most popular industries are health care & social assistance, retail trade, and manufacturing. Clackamas County has communities that are attractive to many lifestyles, so it’s popular among retirees, young families, singles, and professionals alike. There are 14 incorporated cities in Clackamas County.

Educational Attainment: 93.4% of the population has a high school diploma or higher

Portland is Oregon’s largest city and is situated on the south side of the Columbia River, which separates Oregon and Washington. Lewis and Clark found the indigenous Chinook people there in 1805. Pioneers began arriving in the 1840s via the Oregon Trail. The city was incorporated in 1851. Portland enjoys warm, dry summers and cool, rainy winters. Portland is known for its many parks, bridges, bike paths, and majestic views of snow-capped Mount Hood to the east. Portland is an eco-friendly city with plenty of microbreweries and coffeehouses. The Oregon Zoo is located there. You’ll also find vibrant art, theater, and music scenes in the city.

Lake Oswego is a suburb just 8 miles away from Portland. Albert Alonzo Durham founded the town in 1847 and named it after Oswego, New York. Oswego was incorporated in 1910. The 420-acre Oswego Lake is the perfect spot for swimming, boating, fishing, and other water activities. Oswego is a golfing community, featuring Oswego Lake Country Club and the Lake Oswego Public Golf Course. The beautiful Oswego neighborhoods are surrounded by 24 parks where you’ll find an amphitheater, a swim park, a water sports center, indoor and outdoor tennis courts, picnic shelters, playgrounds, and much more. Oswego also has exceptional schools and a laid-back feel, even though it’s so close to Portland.

Oregon City is the county seat of Clackamas County. The city is located along the Willamette River 25 minutes south of Portland. Oregon City was established in 1829 by the Hudson’s Bay Company and was the first U.S. city west of the Rocky Mountains to be incorporated in 1844. Museums abound in Oregon City, including the Museum of the Oregon Territory, the End of the Oregon Trail Center, and the Stevens Crawford Museum. Oregon City also is home to many historical buildings such as the McLoughlin House, the Ermatinger House, and the First Congregational Church. The city has over 22 parks that offer many outdoor activities and walking trails. Nearby Willamette Falls is the second-largest waterfall by volume in the U.S.

Tualatin is a southwest suburb of Portland. It’s primarily located in Washington County, but part of it sits in Clackamas County. Tualatin was named for the Tualatin River that flows along the city’s northern border. The city was first called Bridgeport in 1853. The name was changed to Tualatin in 1915, and the city was incorporated in 1913. Many prehistoric artifacts have been uncovered in Tualatin and are on display at the Tualatin Heritage Center and the Tualatin Public Library. The Tualatin River Greenway Trail, which runs alongside the Tualatin River, is a great place for nature lovers to soak up the beauty around them and learn about the Tualatin Valley’s prehistoric past.

West Linn is an affluent suburb south of Portland. It was named after U.S. Senator Lewis F. Linn of Missouri, who had advocated the American occupation of Oregon as a counterclaim to the British. Settlers first arrived in the town in 1839. First called Robin’s Nest in 1843, the city was renamed West Linn in 1845. West Linn was incorporated in 1913. CNN/Money Magazine named West Linn one of the best places to live in 2011. The city offers historic walking tours, jetboat excursions, a public fishing dock, and has a claim to the largest meteorite in North America! West Linn boasts over 600 acres of parks, which offer many activities such as sports, picnicking, walking, biking, and watching wildlife.

The city was founded by the grandson of Daniel Boone in 1846 and named Boone’s Landing. The name was changed to Wilsonville in 1880. It was incorporated in 1969. Wilsonville lies about 17 miles south of Portland. Wilsonville has 15 public parks covering just under 200 acres, with five sports fields, and a wide variety of recreational amenities. The city has a low crime rate, one of Oregon’s best public school systems, and offers a wide selection of housing options that will appeal to people at every stage of life. During the summer months, residents enjoy lots of activities, including outdoor movies, a concert series, a beer festival, an arts festival, and a cycling race. Wilsonville also has a Korean War Memorial and a 250-acre nature park you can visit.

Milwaukie was founded in 1847 on the banks of the Willamette River and named after Milwaukie, Wisconsin. The city was incorporated in 1903 and is referred to as the Dogwood City of the West because of its spring blossoms. It’s also the birthplace of the Bing cherry. Milwaukie is a friendly town with excellent shopping, wine bars, and taprooms such as the Breakside Brewery. The city also features plenty of outdoor activities. Enjoy summer fun sliding down the slides and splashing in the pools at the aquatic park. Try the climbing wall or exploring the river by kayak.

Happy Valley is a suburb of Portland, located approximately 10 miles to the southeast. The city was settled originally by Christian and Matilda Deardorff in 1850 and named Christella Valley, combining the founders’ names. It was officially incorporated as Happy Valley in 1965. Since the late 1990s, Happy Valley has become one of the fastest-growing cities in Oregon. Mount Scott, an extinct volcano, is located in Happy Valley. You’ll find many coffee shops as well as many families there. Happy Valley offers lots of outdoor activities in neighborhood and city parks, and lots of hiking trails to explore. The public schools in Happy Valley are very good.

The city of Canby is located about 21 miles south of Portland. It got its name from Civil War hero Edward Richard Sprigg Canby. The community was founded in 1857 and incorporated in 1893. Canby is home to some of the state’s richest farmland. With fall festivals, grape stomping and pumpkin weigh-offs, ferry rides, and year-round trout fishing, Canby has something for everyone. Downtown features a wide variety of shops and restaurants, wine bars, and artisan chocolate shops. Canby is a family-friendly community offering many sports and youth activities as well as outdoor recreation for all ages, such as boating, cycling, fishing, and golf. The Canby school district is very good, and the schools are modern with state-of-the-art technology.

Gladstone is a small city just 12 miles south of Portland and is located where the Clackamas and Willamette rivers merge. Gladstone is the ancestral home of the Clackamas Indians, and the Pow-Wow Tree in town is a reminder to residents and visitors alike. Oregon Trail homesteaders settled in the area in the 1840s The city was founded in 1889 by Judge Harvey Cross and incorporated in 1911. Gladstone is named after British statesman William Ewart Gladstone. Despite being less than 3 square miles in size, Gladstone has 14 parks and recreational areas. Outdoor adventurers can enjoy fishing on the Clackamas and Willamette rivers and hiking through the local parks. The downtown area has interesting coffee shops and antique stores.

Here is a complete list of cities in Clakamas County, sorted first by population, then other metrics from the US Census. Education Level is the % of the population that has finished high school. The Population Growth is from 2010 to 2019. If they exist, under Type, we have included cities, towns, villages, census designated places and more.

Q: What’s the most affordable city in Clackamas County?

A: Of Clackamas County’s largest cities, Gladstone is the most affordable.

Q: How many cities are there in Clackamas County?

A: There are 14 incorporated cities, towns, villages or hamlets in Clackamas County.

Q: What’s the most expensive city in Clackamas County?

A: Out of the top Clackamas County’s cities, Lake Oswego is the most expensive.

Now that you’ve learned about the largest cities in Clackamas County, you’re ready to decide which one is right for you! When the time comes to relocate to Clackamas County, make sure you’re working with the top movers to help get you there. PDX Moving is the best professional moving company in all of Clackamas County. Call us today at 503-746-8795 to get started on your free quote!

Please confirm deletion. There is no undo!