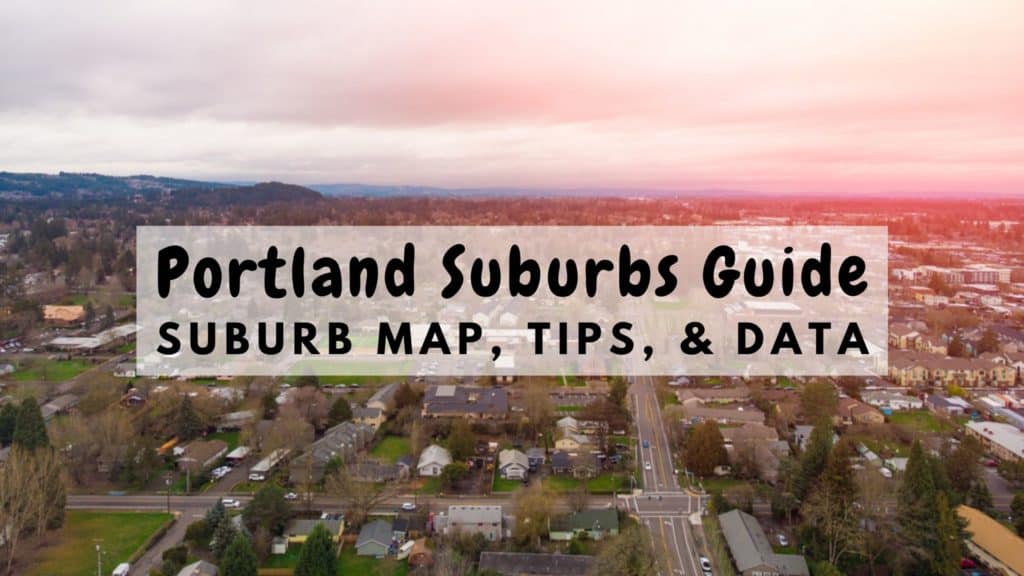 While the main portion of this city is often known for being a hub for liberals and those dedicated to being environmentally friendly, its surrounding Portland suburbs offer a bit more diversity for people thinking about moving there.

Defined as a residential community located on the outlying parts of a metro area, a suburb offers the benefits of being further away from the hectic aspects of a big city.

A look at the list below will point you to the most popular areas to live near Portland and help you know if it’s the right place for you. From small affordable communities to highly-affluent towns, you’re sure to find a good Portland suburb for you!

Check them out and see which suburbs of Portland sound the most appealing to you.

1. Hillsboro – Among the Top Cities near Portland for Families

You’ll pretty much always find the city of Hillsboro on lists of the best areas to live near Portland. This Portland suburb has many comfortable neighborhoods such as Orenco Station and Reed’s Crossing, where you’ll have plenty of amenities nearby.

Locals consider it a great place to live near Portland for families as nearly 25% of the population are children under the age of 18 years old. The city is also one of the top options for people who want easy access to local parks and fun things to do in the suburbs of Portland.

While Beaverton represents one of the most beloved places to live near Portland, it is even more commonly known for being the location of Nike headquarters. A large number of the athletic brand’s employees live in Beaverton to enjoy quick and easy access to the 286 acres of offices and business space owned by Nike in this Portland suburb.

Beaverton also plays host to the two top-rated high schools in the entire state of Oregon at the International School of Beaverton and the School of Science and Technology. Students can expect a top-notch education from either of these locations as they are set up for their future in college. Nearby, you’ll also find Tualatin Hills Nature Park, which is a great spot for hiking, biking, and enjoying the outdoors.

3. West Linn – Topping the List of the Safest Suburbs of Portland

Often recognized as the safest city in Oregon, the community of West Linn gives its residents a peace of mind like you won’t find anywhere else in the state. This amazing suburb of Portland offers great places to eat such as Lá Sen Vietnamese Grill and J. Willy’s Public House, both of which have a strong following in the area.

West Linn High School offers a dependable education program to local students living in the area as well, ranking among the most reputable Portland suburbs with the best schools in Oregon. Ask anyone living in West Linn and most people will likely tell you it’s one of the Portland suburbs worth a look.

4. Bethany – One of the Most Affluent Portland Suburbs

Offering a wealthy, suburban lifestyle to its residents, the city of Bethany is a bedroom community with only a couple of small commercial spaces within its borders. This area offers the easiest access to the University of Portland, which is less than 10 miles away.

Playing a major part in what is known as the “Silicon Forest”, many of the workers residing in Bethany travel for the jobs at companies like Intel, Tektronix, Nike, U.S. Bank, as well as local hospitals.

5. Gresham – An Affordable Suburb in Portland

As one of the Portland suburbs along the big city’s eastern border, Gresham provides quiet living and affordable housing. Although it is one of the most highly populated Portland suburbs, you won’t have to worry about the area being too crowded since it also covers one of the largest geographic areas, spanning about 24 square miles.

Home to some of the top places to eat near Portland, a few of the best options in Gresham include Nicholas Restaurant and Heidi’s Of Gresham. Along with these nice places to eat, you’ll also find great Portland shopping options at the Gresham Station mall with well-known stores like Ulta Beauty, Old Navy, Best Buy, as well as Cost Plus World Market.

Tualatin has a decent amount of diversity and while many people residing in the area are singles, the city is still home to a good amount of young families as well. The reliable school district offers good programs for kids of all ages, making parents take a closer look at this community when trying to find the best place to live near Portland.

This scenic Portland suburb is a great choice for those who enjoy the outdoors as it is right next to the Tualatin River National Wildlife Refuge. As you wander through this 1,856-acre piece of land, you’ll have the opportunity to see hundreds of species of birds as well as raccoons, beavers, black-tailed deer, frogs, salamanders, as well as fish in the nearby Tualatin Lake.

7. Oregon City – A Great Place to Live near Portland

Located on the south side of the gorgeous Willamette Falls, Oregon City is a suburb across the river from West Linn. The city is seen by locals as the End of the Oregon Trail with a local center where costumed representatives offer tours and insight into what this long journey entailed for those who took it.

Residents living in Oregon City enjoy comfortable neighborhoods such as McLoughlin, Clackamas Heights, and Gaffney Lake. The area also offers a simple commute straight up the 43 Highway, making it a convenient Portland suburb to live in.

With the large number of children in the area who attend schools in the Tigard-Tualatin School District, you’ll quickly find Tigard is one of the finest cities near Portland for families. Many people residing in Tigard commute to nearby cities like Beaverton or downtown Portland for work.

If you decide this is the suburb of Portland for your needs, you will have convenient shopping close by with popular places like Starbucks, Target, and more. It is also home to great Portland parks like Summerlake City Park and other fun things to do in the suburbs.

This popular city surrounds the beautiful Oswego Lake and can regularly be found among the safest Portland suburbs in the state. The area offers prime real estate and comes with a matching price tag that presents some of the most expensive housing costs around.

The local Lakeridge High School is among the top 5 high schools in Oregon. Residents of Lake Oswego enjoy some of the most beautiful master-planned communities among all Portland suburbs that include options like First Addition, Blue Heron, Mountain Park, and more.

Choose the Best Portland Suburb for You

Whichever of these local Portland suburbs you pick, you’re sure to find it’s a great place to live with convenient access to the big city.

Do you need a friendly moving company to assist you with a relocation to one of these cities near Portland? Trust PDX Movers by calling (503) 746-8795 today or get a free moving estimate by completing the Request a Quote form above!