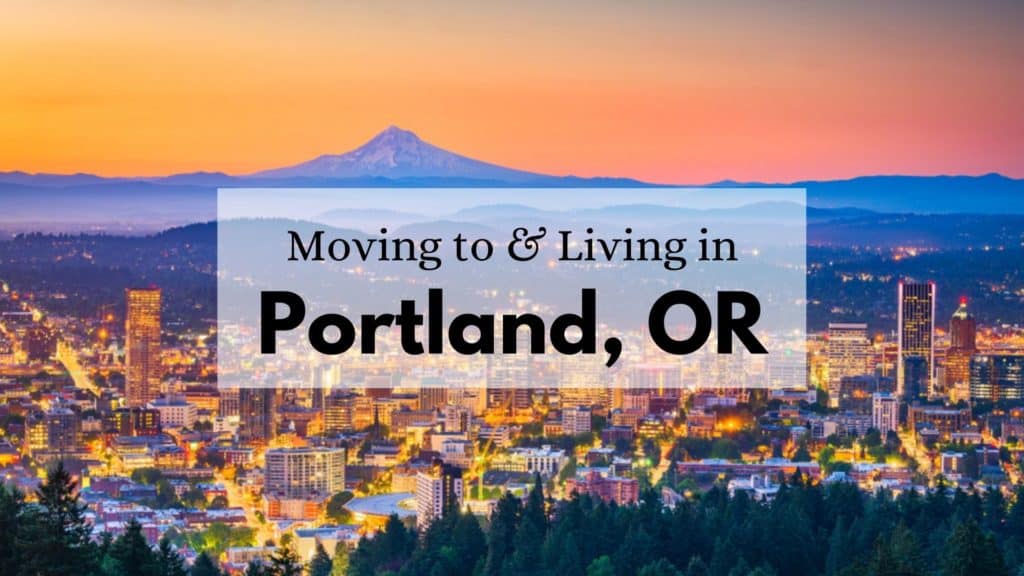 What Living in Portland is Like | 🏆 Is Moving to Portland a Good Idea?

Portland is the largest city in Oregon and the county seat of Multnomah County. Due to its proximity to the confluence of the Willamette and Columbia rivers, Portland is a major port in the Pacific Northwest. Portland is known for its many parks, thriving arts and music scene, and eco-friendly philosophy. The city is just 60 miles east of the Pacific Ocean in the Willamette Valley, Oregon’s most populous region.

Portland was named after Portland, Maine, and has many nicknames. Among the most popular Portland nicknames are the City of Roses or Rose City, Stumptown, Rip City, Beervana, Soccer City, P-town, Portlandia and PDX. Portland’s culture is artistic and creative. Famous people from Portland include NASCAR racer Jim Brown and animator Matt Groening (creator of The Simpsons).

The establishment of Portland dates back to the 1840s, when the Oregon Trail brought many settlers to the region. Portland was first named Stumptown, due to the number of trees that were cut down to create the settlement. When Francis Pettygrove purchased roughly 320 acres in 1845, he renamed the area Portland, after the Maine city from which he hailed. The city was incorporated in 1851 with a population of about 800. Portland’s location at the convergence of the Willamette and Columbia rivers, as well as its proximity to the Pacific Ocean gave the city major advantages as a port city. This, and its early agricultural success, led to Portland’s early success. 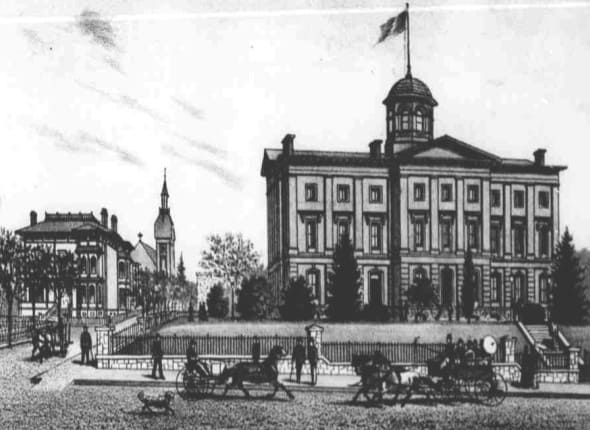 Its reputation in the late 19th century was one of a dirty, dangerous city of disrepute. That didn’t stop Portland’s population from growing – in fact, the city tripled in size between 1900 and 1930. Portland continued to flourish after World War II when Henry J. Kaiser chose Portland as one of his shipbuilding work yards, which brought another 150,000 residents to the area. In the 1960s, Portland was a major home to the hippie subculture, and social activism became a calling-card of the city. The 1990s saw a tech boom in Portland with companies like Intel setting up shop there. The 2000s and 2010s brought more population growth, most notably with young professionals. Today, Portland continues to be considered a very progressive city and tech hub.

Portland has a population of 652,573 and is increasing at about a 0.7% annual rate. The Portland Metropolitan Area is home to almost 2.4 million residents. Portland is somewhat diverse, with a demographic breakdown of 70% white, 8.8% Asian, 6.1% Black or African American, 9.3% Hispanic, and 5.8% mixed/other races. Currently, 13.6% of its population is foreign-born, a rate that has decreased by 0.1% annually. Most foreign-born Portlanders come from Mexico, Vietnam, and China. Portland’s metro population is 2,478,810.

The median household income in Portland is $76,231, which is about 10% higher than the median household income across the state of Oregon. Income is on the rise too – Portland saw a 10.4% increase in annual median income from 2017-2018. The biggest industries in Portland are healthcare and social assistance, professional/scientific/technical services, and retail. The most common jobs are management, office/administrative, and sales-related positions. About 52.8% of Portland residents have obtained their Bachelor’s degree or higher.

Cost of Living in Portland

The real estate market in Portland is considered somewhat competitive. Homes sell in about 9 days, usually at 1% above asking price with multiple offers. The median sale price for a Portland home is $489,000, which is about $286 per square foot. Housing prices are rising in Portland – median sale prices are up 11.1% over last year. About 54% of people in Portland own their homes. Click here to see Portland, OR homes for sale. Property taxes in Portland are around $3,000 annually.

About 46% of Portland residents rent their homes. Average rent in Portland averages to about $1,537 a month, which is down 3% since last year. Portland’s most affordable neighborhoods to rent are Bridlemile, Parkrose, and Powellhurst. The most expensive rental areas are Pearl District, Roseway, and Hayhurst.

Perhaps the most exclusive neighborhood in Portland is Hillside. Though there are some affordable options along the edges of Hillside, the heart of the neighborhood is home to sprawling architecturally interesting homes. Hillside also boasts access to a long list of gorgeous outdoor spaces.

Goose Hollow is one of the first established neighborhoods in Portland. It’s adjacent to Downtown, so it’s a great option for working professionals looking for a quick commute. Goose Hollow is also known for its beautiful architecture – the historic homes have been very well maintained. Residents enjoy easy access to tons of amenities. Sports lovers will enjoy being close to Providence Park, home of the Portland Timbers and PSU Vikings.

Located between Forest Park and the Willamette River is Linnton. Crime rates in Linnton are 60% lower than the Portland average, which is a contributing factor to the large number of families with children who live here. Parents can choose among great schools like Skyline Elementary School or Jacob Wismer Elementary School.

The following neighborhoods are considered the least safe in Portland:

Though Portland has a reputation for being gray and rainy, it has more sunshine and less precipitation than other large cities in the Pacific Northwest. Portland’s climate is categorized as warm-summer Mediterranean, meaning cool/cloudy winters and warm/dry summers.

The best time to visit Portland is from June to August. Not only are these the drier months, but summers are known as “the season of roses,” during which endless flowers are brightly blooming. November through February is the least pleasant time of year in Portland, when temperatures are colder, sunshine is scarce, and the area receives the most rain and snow. December is the coldest month in Portland, with average highs of 45.7°F.

Portland has about 154.5 rainy days a year, during which 36” of rain falls. November is the wettest month with 19 days of rainfall, and July is the driest with 4.1 rainy days.

Portland is known for its doughnuts, microbrew/craft beers, and amazing coffee. Here are some of the best places to try each kind!

Perhaps the best known doughnut shop in Portland is Voodoo Doughnut. This quirky shop immediately grabbed national attention, and has grown to include nine locations. Patrons come for the innovative flavors and stay for the people watching.

Things To Do in Portland

If you decide to move to Portland, you won’t have a hard time finding something to do. The city is pulsating with activities for foodies, nature lovers, art and history buffs, sports fans, and shoppers. Here are some of the best activities in Portland:

Depending on where you’re relocating from, you may need all your utility accounts transferred, or start with new providers. Here are the utility providers in Portland:

Portland is home to three major league professional sports teams. The Portland Trail Blazers (NBA), the Portland Timbers (MLS), and the Portland Thorns of the National Women’s Soccer League all call Portland home. Collegiate sports include the University of Portland Pilots and the Portland State University VIkings. Both universities (who are rivals) have popular soccer, baseball, and basketball teams.

Soccer fans head to Providence Park and Hillsboro Stadium to take in games.  The Trail Blazers play at the Moda Center, as does the Western Hockey League’s Portland Winterhawks ice hockey team.

When it comes to transportation, Portland is highly ranked in the United States. It’s one of the nation’s most walkable/pedestrian-friendly cities, but its transit system often draws praise as well.

Portland is one of the most bike-friendly cities in the US. In fact, the city boasts 385 miles of bikeways (comprising neighborhood greenways, bike lanes, and paths). The city hosts a bike sharing program called Biketown, with 1,500 bikes and 180 pickup/drop-off locations.

Portland is considered safer than 9% of other cities in the United States, and crime has decreased by 4% year over year in Portland.

Crime rates in big cities can vary from neighborhood to neighborhood. When considering a move, it’s important to look at each area’s statistics to ensure you’re moving to a community in which you feel safe. Click here to look through Portland’s interactive crime dashboard provided by Portland Police Bureau.

Portland’s economic success is due to its location, low energy costs, and easy access to transportation. The Port of Portland is a major export tonnage port on the west coast, and the second biggest wheat port in the world. Steel is also a major industry in the Portland area, which is home to Schnitzer Steel Industries, ESCO Corporation, and Oregon Steel Mills. The tech industry is also huge in Portland, earning the city the nickname Silicon Forest. Software companies, startups, and incubators are all big industries in Portland, and Intel is the city’s biggest employer. Many outdoor/athletic clothing companies are headquartered in Portland. Major companies like Adidas, Columbia Sportswear and Dr. Martens, all have global or US offices in Portland. Under Armour, Merrell, and Amer Sports also have offices and design studios in Portland. Portland is also home to two Fortune 500 HQs: Nike and Precision Castparts.

Intel Corporation and Nike are the top employers in Portland according to Glassdoor rankings. Software companies New Relic and Mentor Graphics are highly rated as well, followed by Apple, Portland State University, and HP.

If you’d like to work for the City of Portland, there are a lot of great opportunities available! Click here for more information about Portland government jobs. For additional job opportunities in Portland and nearby areas, click here to see what’s currently listed on Indeed.

Portland is served by 9 public school districts comprising 171 schools, and 88 private schools. The largest public school district is Portland Public Schools, which is made up of 85 schools. Students in Portland receive test scores 3% above the national average, and the high school graduation rate is 6% higher than the national average. The student/teacher ratio in Portland is 19:1. Portland’s top schools include Skyline Elementary School, Winterhaven School, and Riverdale Grade School.

Portland also has a great selection of higher education institutions. Portland State University has a student body of almost 30,000, making it the second largest university in the state. It is ranked among the top 15% of universities in the region, and has earned international recognition for its urban planning and MBA program. Students may also choose to enroll at Concordia University-Portland, Oregon Health & Science University or Portland Community College. Private universities in Portland include University of Portland, Reed College, and Lewis & Clark College. Average tuition costs in Portland are $29,620 for private colleges, $10,524 for in-state public colleges, and $24,885 for out-of-state students. The most common majors among Portland college students are Liveral Arts & Sciences, Curriculum & Instruction, and General Studies.

Are you considering a move to the Portland area? Our highly trained, trustworthy movers are the best in Portland. Call PDX Movers today to get started on your free quote!